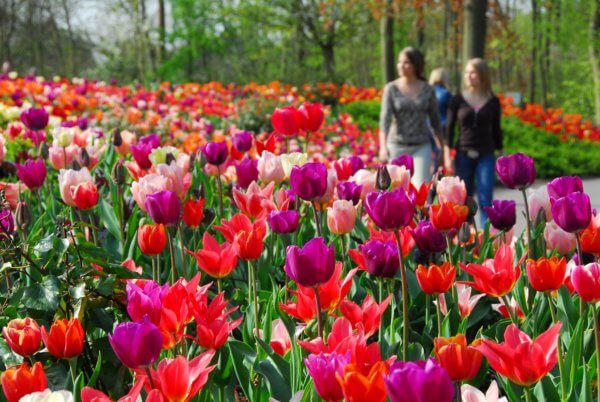 During the spring months of March to May Amsterdam is transformed into a rainbow of colour as endless amounts of tulips burst into bloom and cascade their beauty upon each and every aspect of this wonderful city. Amsterdam is famous for its Dutch tulips and known all over the world for being the epicentre of tulip cultivation.

Tulips were imported to Holland during the 16th century from what was the Ottoman Empire that is now known as Turkey. In 1952 Carolus Clusius wrote a book all about tulips which led to them becoming so popular his garden was often raided and his tulip bulbs were often dug up and stolen. At one point tulips were so valuable they were used as money.

Today tulips are a beautiful flower that are enjoyed all over the world, many of which are exported from Amsterdam. With such history and cultivation knowledge, it is of no wonder that Amsterdam is one of the best places to see tulips at their very best.

The most famous garden to see tulips in is the Keukenhof, home to over seven million tulip bulbs that bloom into vibrancy every spring. Only open for just a few weeks this is definitely a floral experience not to be missed. The colour and sheer volume of flowers to be seen is breathtaking and will definitely leave a lasting memory.

Another excellent way to embrace the tulip season is to meander the city soaking up the abundant displays of tulips while heading to the Amsterdam flower markets, in particular, the floating flower stalls on the canal at the Bloemenmarkt. With plenty of stalls to peruse and lots of blooms to be admired this is a relaxing way to spend an afternoon.

During the season there are lots of opportunities to pick your own tulips by visiting a picking garden. These pretty spaces allow you to enjoy the colourful displays and experience mixing your own colours, what a nice way to add a bit of personal colour to your hotel room.

Two museums that are well worth exploring are the Amsterdam Tulip Museum that is home to a cabinet of curiosities showcasing some very unusual tulip artefacts, and the Museum de Zwarte Tulip (museum of the black tulip) in Lisse. Here you can discover the cultivation and history of tulip production and see pieces of art produced by artists that have been inspired by the intrigue and beauty of the tulip.

Wherever you go in Amsterdam during the spring season you are never to be far away from a tulip or two but did you know that they all have very different meanings depending on which colour they are? A pink tulip often means caring, while a white symbolises purity, purple stands for royalty and red, of course, represents true love. No matter which colour is your favourite tulips are a flower of real beauty and there is no better place to see them in the world than Amsterdam.