I have to say I have been overwhelmingly impressed with people we have met throughout Switzerland. They have all been so efficient and pleasant and how easy they make it for us by speaking English – the knock on effect of this is how guilty it makes me feel for not speaking other languages.

One man who I asked of help in Bern said “of course” when I asked if he spoke English.

An hour into the journey and we have been served with tea and coffee at our seats.

Now the woman who did that was not as friendly. And I confess I expect a scene when I ask to go off piste and ask for something vegetarian without pre-ordering it.

So far all our trains have been on time and the only connections we have missed have been our fault with the ‘great wallet fiasco’ and the lack of Swiss rail card situation.

It is just as well they are so punctual as we have had lots of tight changes to make throughout the rail trip so far.

Whilst mentioning wallets, Mel has decided that he will nip back to Bern from Montreux to collect it. We still have no idea what is left in it, but we are hoping that his driving licence and our rail cards are still there. Fingers crossed…

We have not got a window seat at present, but the helpful guard has said he will try and get us one when the big tour party leaves the train further into our journey.

A very quick change and a lot of panic on my part brought us here to the Glacier Express.

I instantly felt what I thought was ‘an atmosphere’ in our wonderful panoramic car, but then realised everyone was wired for sound and listening to a commentary on the journey. Paranoid – moi? 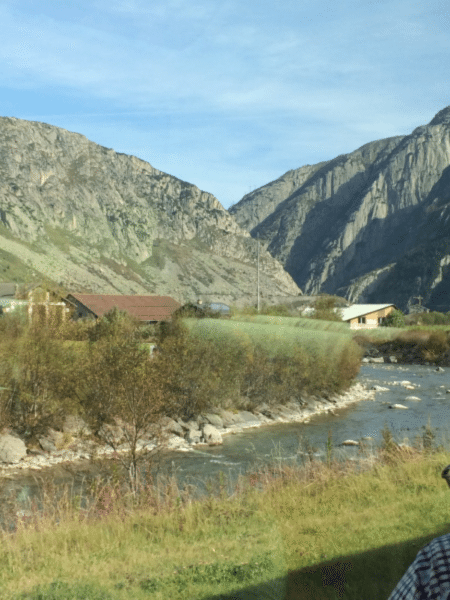 So now we’re almost settled in our seats on the world famous Glacier Express, tickets checked and choice of starter for lunch given.

Now the sun is out, so I’m going to sit back and enjoy the ride.

The scenery all the way on the Glacier Express was so amazing that once again I am lost for words.

It is impossible to describe the beauty and once again we were lucky enough to see it on a clear day.

It took a long time to get chatting to our neighbours on the train as they did not appear very talkative or approachable and I know that not everyone is like me who likes to chat!

The two men on our table were German and the younger of the two was very quiet indeed.

The couple on the other side of the aisle turned out to be from Hertfordshire and both had worked for BP. Eventually the six of us ended up sharing some laughs, mostly about the Acorn Antiques style of service we were receiving.

To be fair I should have been ready for it having read up on the Glacier Express on Tripadvisor. But it really was pretty dreadful and certainly not a patch on the service we have received on the North York Moors Railway.

One of the “waiters” (and I use the term loosely) was obviously on his first day and did not even know where to put a knife and fork.

None of this spoiled the trip, although if we were to take the trip again I think we would skip the meal and just enjoy the journey. There was so much coming and going from early on that it was difficult to read or write this blog post!

Anyway, eventually we arrived at Chur, about half an hour late. Our first late train!!

We included a few photos to give you an idea. 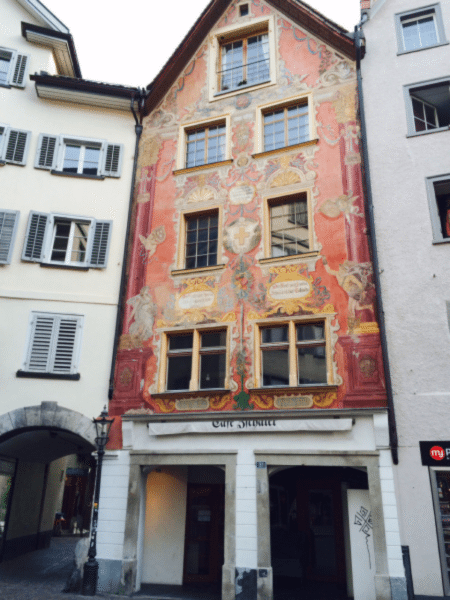 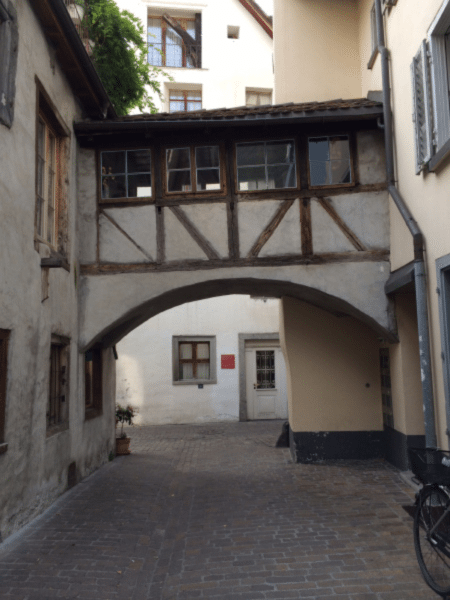 The hotel is also a little old fashioned but very central, but oh how I miss the view from our balcony in Wengen! 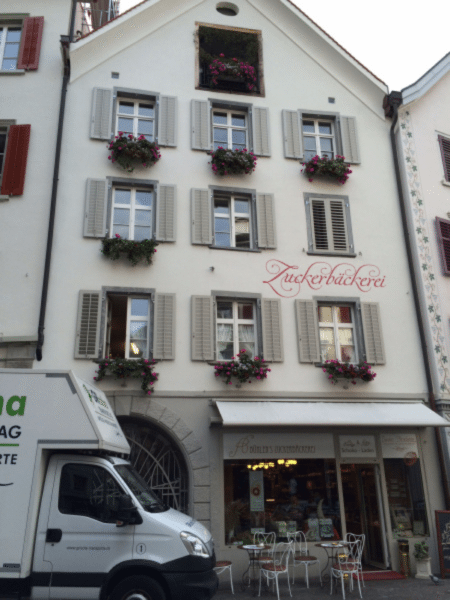 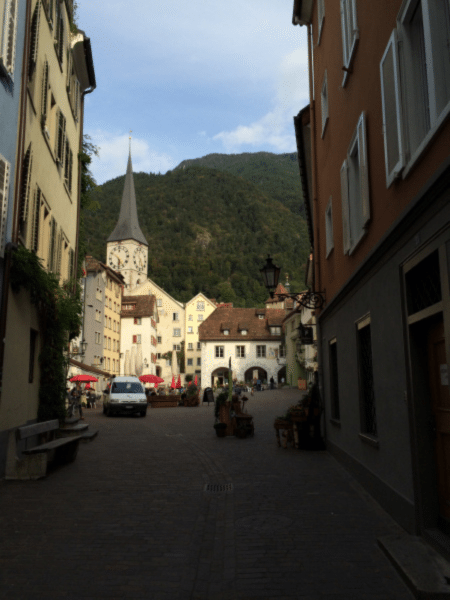 Also this morning we took two cable cars up to Brambruesch which is a height of 1595m (approx 5,200ft).

The first cable car was relatively relaxed. That said, I could see panic on one woman’s face as we approached the tower. How it rocked and how I hated it, but not as much as the little 4 seater car that took us from Kanzeli to the top!

Eyes tightly shut until we were almost at the top I was relieved that we had decided to walk down.

After a delightful walk on the top and a look at yet more magnificent views we searched out a restaurant serving rosti.

We found one and all I can say is it was just as well we were walking down again as the portions were enormous.

Views from Brambruesch above Chur

On the trail down we had gone about 15 minutes when we came upon a no entry sign and we realised that the lumberjacks (not the ones in high heels, suspenders and a bra) were working close to the path.

There was a diversion sign which took us on a muddy track but it only took an hour until we were back at the cable car station. This time we were the only ones in the car and something about the way the man said “bye” as he closed the doors sent a disturbing chill through me. I had jelly legs all the way down and to stop being so scared I sang “with a knapsack on my back” the whole way down. I hope they don’t have microphones in the cars.

This is the week they bring all the cows down from the mountain for the winter.

And just a thought – if you were a Swiss cow how would you feel about having a whacking great bell round your neck and a toupee the whole time?!