Yesterday it was blue sky all the way for us as we took the train up Jungfrau.

We had reserved our seats for this part of the train holiday – which was a good thing as even though this is off season it was very busy. So something we’d absolutely recommend to anyone planning on making the trip.

I was astonished at the sheer size and scale of the tunnels and throughout the journey thought often of those men who built this railway.

It’s inevitable really, but I discovered later that there was quite a considerable loss of life in the construction of those feats of engineering.

We stopped twice to get off the train and look through enormous windows at the view of the glacier.

Nothing could quite prepare us though when we reached the top and the ‘whiteness’ was mind blowing. Because we’d been lucky enough to have clear skies we could see for miles and miles – I think we must have been so lucky to be up there on such a day and I am sure that it cannot happen that often. 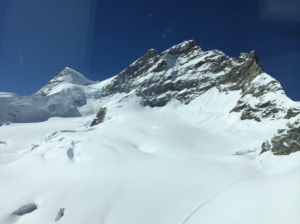 Unfortunately for every action there is an equal and opposite reaction and the second we got off the train I felt really dizzy. It took me a moment, but of course I soon realised that it was the altitude. With this in mind, we headed to the restaurant at the top. A pan full of steaming rosti and a beer soon made me feel human again!

We spent several hours at the top and went out onto the snow and thought seriously about going on a sledge or a tyre down hill. Fortunately my common sense kicked in. So I sat and waited while Mel scaled the north face of the Eiger….

Well no, not really, he walked about a mile uphill along with dozens of others to a viewpoint.

He said it was very hard going because of the altitude and he and everyone else had to stop frequently. The reason I did not attempt it was by then I had developed the worst headache ever and felt terrible. I heard many people complaining of the same thing. One man said he thought it was because of the intense sun on the snow but I thought it was the altitude. Definitely something to be aware of if you’re planning a trip.

Anyway despite all that it was an amazing experience and true to form we are now both sun burnt.

On the way back down the mountain we got off at the stop before Wengen and walked the rest of the way after a drink at a restaurant with a view over the village.

It is now 5.30 on Wednesday and we are up early to catch several trains ending with the incredibly famous Glacier Express. Mel has just received a note to say his wallet has been found at Bern and he is debating what to do now…

Next on our journey, we have just got on the train from Interlaken to Spiez. It is a German train on its way to Berlin and it is very swish here in first class.

But then we have been very impressed with all the Swiss trains as well. 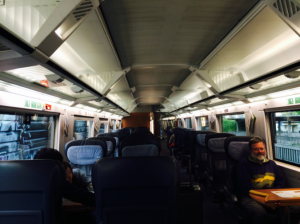 Passing the river with its tourists boats and the water is blue and icy cold looking. I personally like the look of Interlaken – though others have said otherwise.

Our journey started early and we walked from the hotel through the traffic free streets of Wengen marvelling at the clear sky and the stars.

We could see the snowy tops of the Jungfrau mountain and it looks like yet another fine day.

We liked Wengen for its peace (several times we found the silence deafening) and for its spectacular views. The hotel was perhaps a little old fashioned but the people were very pleasant and the view from our bed and balcony was well worth it. 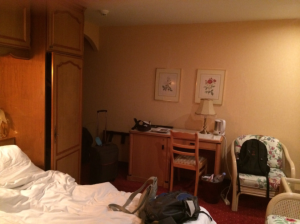 To our surprise on the train, the ticket inspector came round and we discovered that we need a Swiss rail pass for our tickets to be valid. We have not got one or seen one and so she took us to the office in Lauterbrummen.

Of course there was a very efficient lady, who spoke perfect English, and made out passes for us in less than 5 minutes.

But of course we had to pay for them.

Later on our trip, Mel confessed to having seen them but discarded them as they didn’t seem important. Definitely a senior moment – he sent Guy at Planet Rail a sincere apology!

This meant we missed our connection but all is not lost as we had rather cleverly caught an earlier train than we needed to as the connections were always going to be tight today.

A bit of a rush at Brig, but we managed to climb aboard the Glacier Express with 2 minutes to spare. I must confess this isn’t the best picture of it – but it gives you the idea. 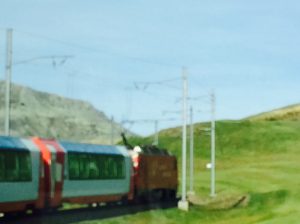