It was quite sad sitting on our little balcony overlooking the Bay of Naples yesterday – our last day in Sorrento.

Although the area is so commercialised and busy we both loved the views and especially the Amalfi coast. It’s an absolute must for anyone interested in beautiful sea vistas!

Although we were told it would be  the same taxi driver back to Naples (if we ever go back I would go via ferry there) it was in fact a different man.  He drove very sensibly until he got on the motorway, but then I had to put my hands over my eyes and squeeze Mel’s hand until it almost bled – Mel admitted that even he was a bit concerned at the man’s speed and driving skills at times.

So it was with total relief we got out at Naples station in one piece.

The station is huge with a plethora of shops and cafes but time was tight and we were able to get straight onto the train to take us to Rome.

Once again it was very busy even in executive class and most of the people were commuters. I was impressed at the beautifully cut Italian suits.  Of course there was also the usual group of Americans with more luggage than they could handle. One of the men was wearing the biggest pair of shorts I have ever seen in my life.  You could keep a whole family in there!

A quick journey of just over an hour and we were in Rome and delighted to see our name held up by a taxi driver.

This happiness was short lived though when he had difficulty getting into the car.  Once in, it was dirty and cramped and we were worried that this was representative of the type of hotel where we were staying in.

We had gone  a matter of yards when he pulled over and got out his phone.  I know we should have got out there and then but I had no idea that he was then going to drive for a full 20 minutes to the hotel looking down at the GPS on his phone and driving dangerously with one hand. This journey made the first on of the day look like a walk in the park.

Somehow we got there unscathed and we left him hurriedly and told the hotel receptionist we were horrified at his driving.

The Hotel River Palace is my least favourite hotel so far.

It felt like a fairly seedy street, and our upgraded room is clean and serviceable but there is no wonderful view as in Sorrento.  It does have a four hour happy hour which was very well supported last night though we chose not to go and went out to a nearby restaurant recommended by the hotel.

It was raining by then and we didn’t want to go far.

We ended up sitting outside in a busy side street under an awning whilst the waiters rushed back and forth trying to avoid what was now quite heavy rain.

It was a great meal (yes we are about a stone heavier than our departure weight now) and we got into conversation with the couple at the next table.

They were American and very funny and interesting (is that an oxymoron?)  They were doing a trip similar to us and we exchanged notes and we were all quite sad to part at the end of the night.

Forgot to say that when we arrived here we hired bikes in the Villa Borghese park.  The highlight of that was coming upon the view over the city and finally I began to be excited about seeing Rome. 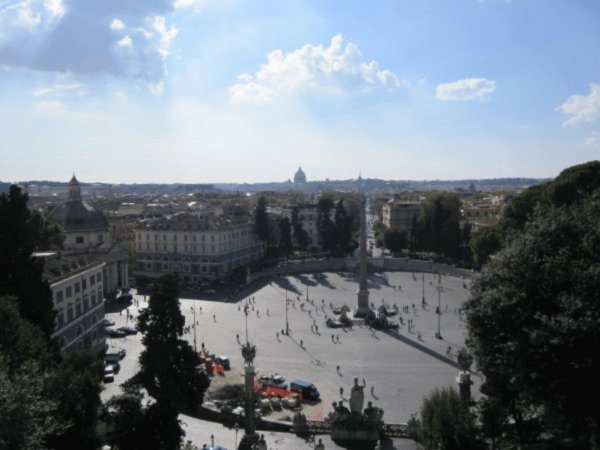 View from Borghese Park across Rome to the Vatican

Today we had tickets booked for the Vatican tour and the Sistine chapel but unfortunately I was not well enough to go.

We did go on the bus tour which was a great introduction to the city and its marvellous buildings.  Once again the superlatives soon dried up and we could only look and gasp.

We got off at the Vatican and walked round  St Peter’s square but by this time it was 27 degrees. Time for lunch and a siesta for me and a Vespa for Mel as he went to the museum. 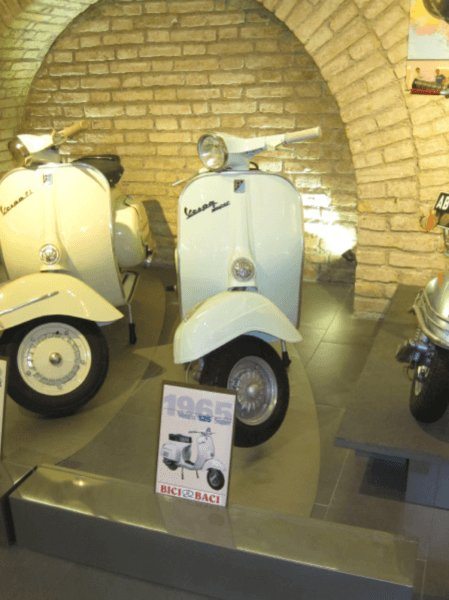 We left Sunday morning as we had been told that the Coliseum was free and we wanted to beat the crowds.

However (we should have guessed this) when we arrived quarter of an hour before opening it was extremely busy.

For some reason you still had to queue for a free ticket but we were soon inside the monster structure and gasping at its delights along with at least a few thousand others.  We did manage to get to one area before the hoards arrived and it was cool and peaceful.

But that was it for the day – following that the crowds were unbelievable and the heat was exhausting. I can’t say that it was one of the better days of the holiday.

Yes, it was great to walk round the Palatine hill and see treasure after treasure and the Coliseum was more dramatic than I had imagined. 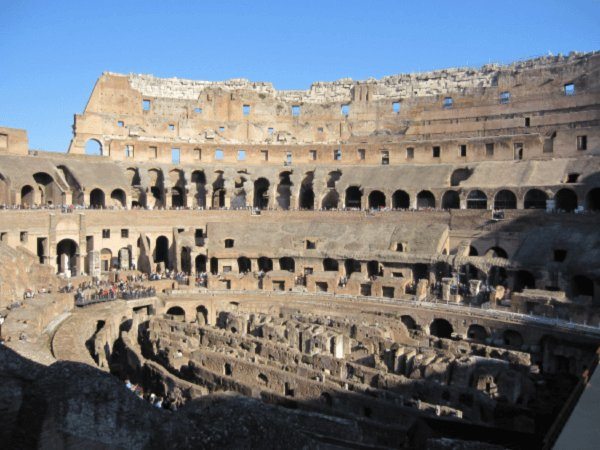 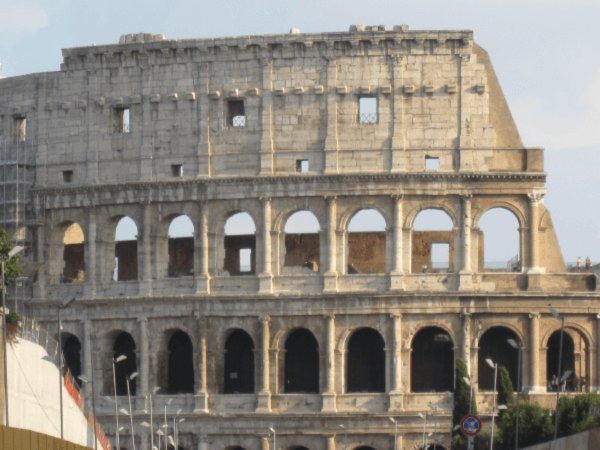 We both loved the Vittorio Emanuel building (the one that is nicknamed the wedding cake) with its chariots on the top and amazing steps and statues. 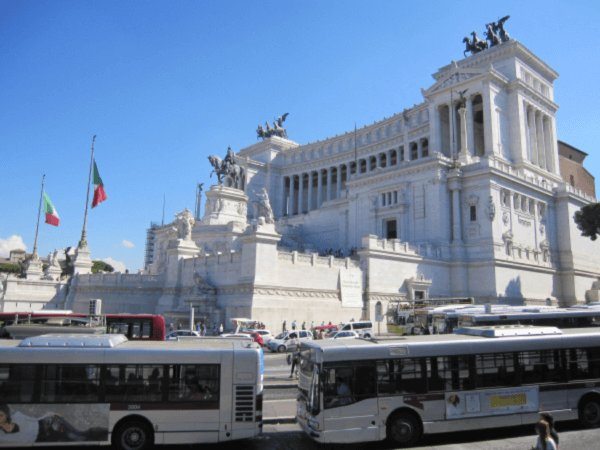 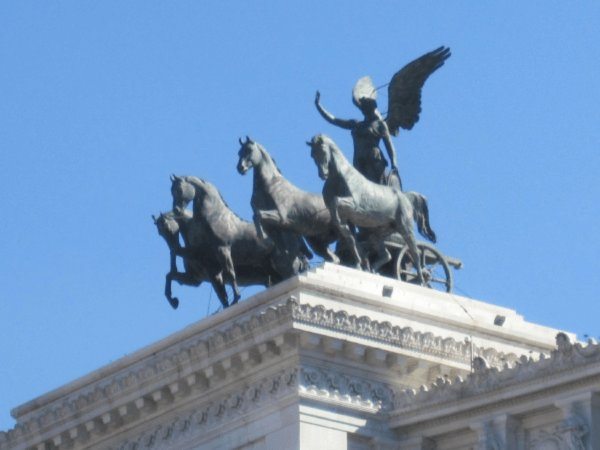 We also had a wonderful long lunch off the beaten track in the Piazza Margana at a very nice restaurant, La Taverna degli Amici, before heading back to the hotel.

Mel went to see the Spanish steps, they were extremely busy, and Mel wondered why they was so popular. I will need to come back and see them and many other things we missed. 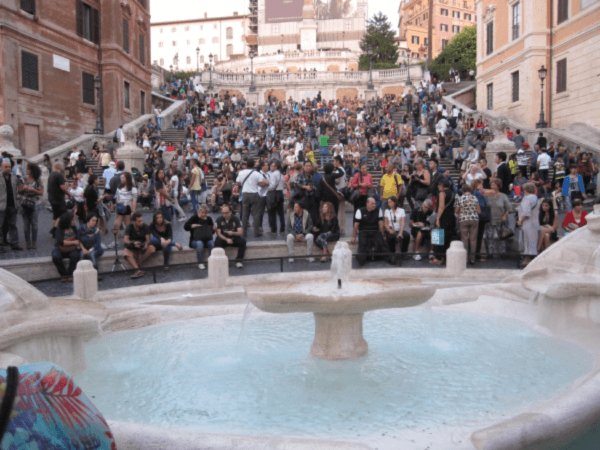 The hotel room has been noisy and dark and it is a shame that I have had to spend so much time here. If I’m honest, I’ll not be sad to leave!