I have heard and read a great deal about the Amalfi coast road but absolutely nothing prepared me for the spectacle that we saw yesterday.

We took one of the red hop-on-hop-off buses from Sorrento (so busy we could not get on the first but were given priority slips for the following bus) and decided to go straight to Amalfi.

Our ultimate goal was to go to Villa Cimprone gardens at Ravello as seen on Monty Don’s programme on Italian gardens.

The drive along the coast to Amalfi is simply indescribably beautiful and spectacular and soon I had run out of superlatives along with everyone else on the bus.  It is not an easy road with dozens of hair pin bends and narrow tunnels. The road falls away down sheer cliffs to the sea.  However it is so amazing that soon you just have to look in awe at the beauty of the place. 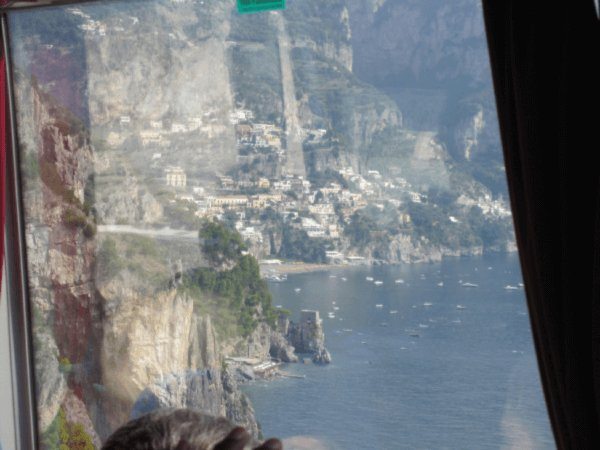 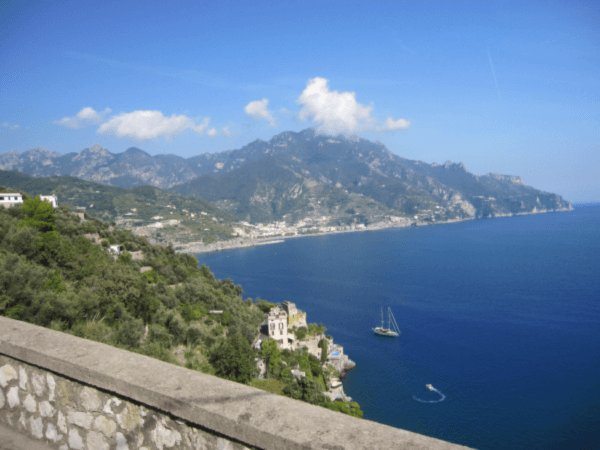 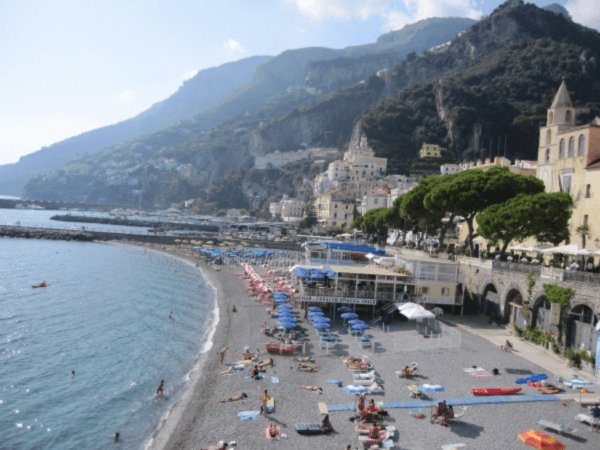 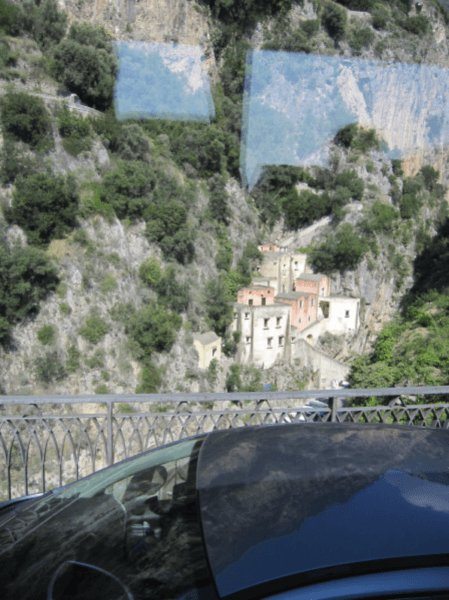 At Amalfi we decided to stop for a bite for lunch and ended up following our feet which led us to an amazing restaurant where we had the best lemon and shrimp risotto followed by (of course) tiramasu.  This was the highlight food so far on our trip.  Food so nice that I did not want to finish eating it.

The next leg of our trip was on a little open top bus and this section of road really is the most scenic I have been on and also the most scary (except for the one near Sapa, in Vietnam.) Numerous hair pin bends disorientate one as you travel along the coast and then up into the hills.

Everywhere you look there are houses clinging to the cliffs or perched on the side of mountains, it was wonderful on the way but I must say that it was even more dramatic on the way home as the light was fading to a dusky pink in the sky and all the twinkly lights were on.

I would not like the bus driver’s job, it demanded huge patience, skill and concentration to drive that road.  There were lots of stops on corners as he could see in the mirrors that another bus or car was coming.  But there were also a few close shaves and the usual daft idiots who overtook in incredibly dangerous places.  But it was such a journey that even I had to look all the time and put my trust in the good driver to get us back safely.

The gardens of the Hotel Cimbrone are incredible – mostly for the view from the terraces rather than the gardens themselves. though… And of course the dozens of sculptures that are dotted around.  It was quite a steep, but a short walk up from the bus, and well worth it -although we were slightly disappointed in the tea shop.

We chose to go back to the square for a drink and sat looking at the views and the beautiful church.  There was a big funeral in progress and the wonderful music flowed out of the church making it very atmospheric. 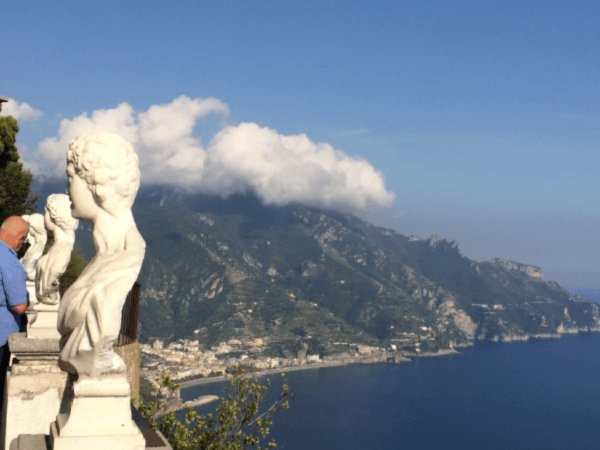 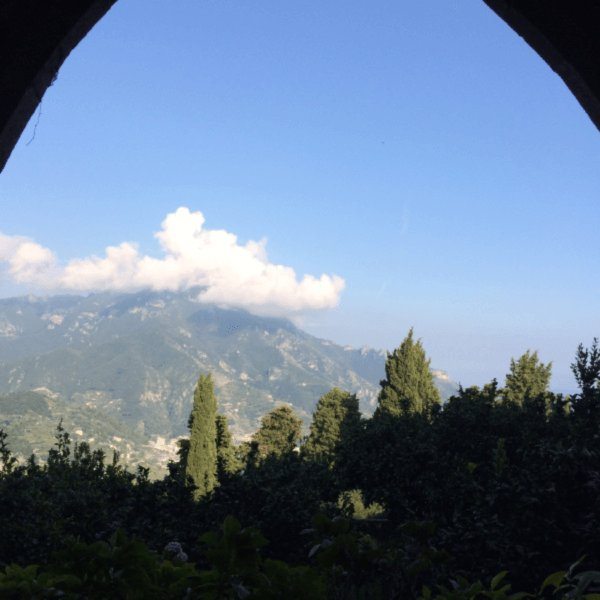 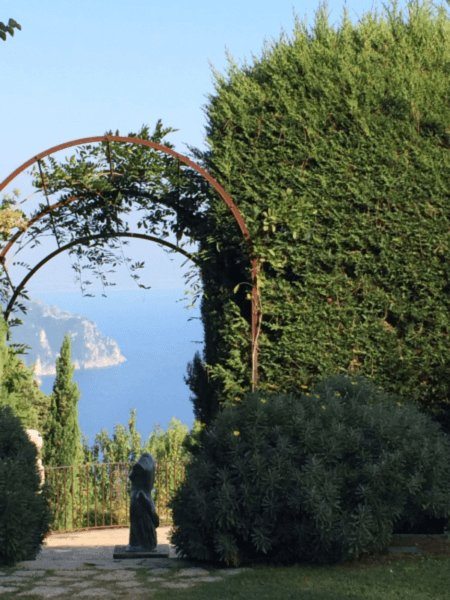 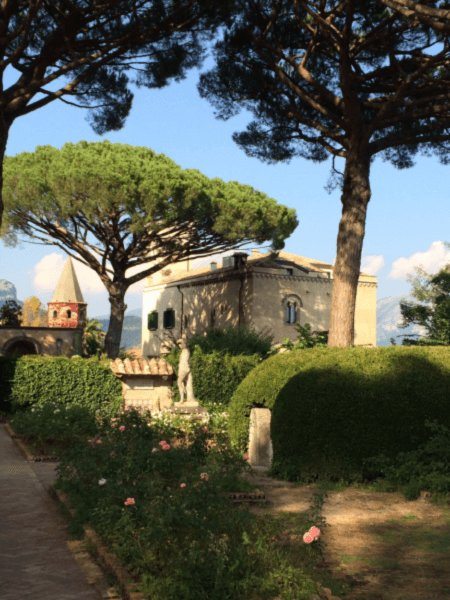 We changed buses again in Amalfi and enjoyed another drink looking out to sea and watching the yachts coming in for the night before the trip back to Sorrento.

“Do you know the way to the brothel?” what a sentence to say!

Words I never imagined saying to Mel but then we were in the ruins of Pompeii.

We took the early train there yesterday on what was our first really cloudy day.  It was pretty quiet when we arrived and I thought it a good strategy to head to the farthest point and walk back.  I had no idea of the scale of the place, it’s huge! This became very obvious when we stopped for a break at the toilet block on a hill where we could see over virtually the whole site. 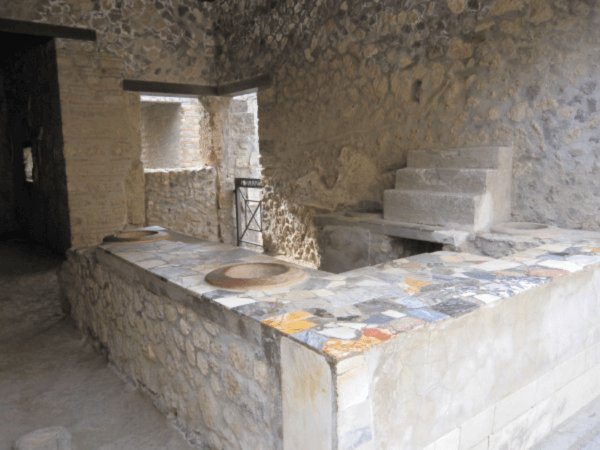 Incidentally this was the only place that you could sit down as there are no seats anywhere and of course sitting on walls is strictly frowned upon.

I found the uneven streets very difficult and even though it was cloudy it was very humid.  In fact half way round, the heavens opened and we were one of the few lucky ones to be near a small temple where we found shelter from the downpour under a stair case. 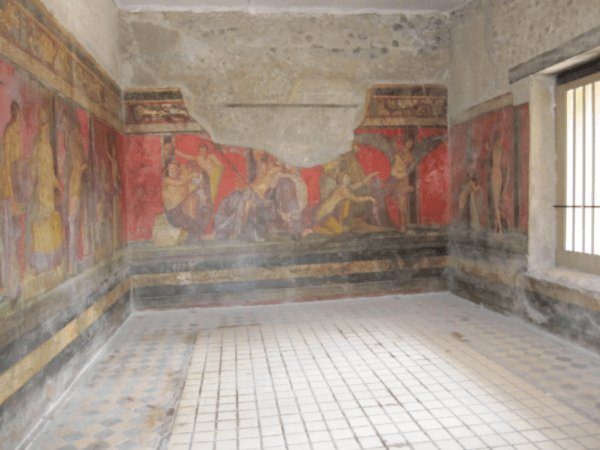 It was such a small place that only the two of us could get in and we had to see off various people who wanted to share our refuge from the rail.  By the time we emerged, the streets were running with water but this was swiftly dealt with, inevitably by the efficiency of Roman drains. 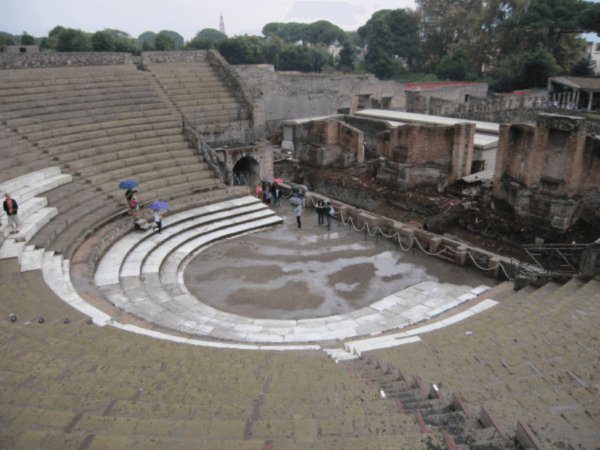 We did not see everything in our four hours there but highlights for us both were the Baths and the Coliseum.

We never did find that brothel.

For our last few hours here we lay by the pool, I have tried to paint various scenes I had sketched on our travels (with no success) so gave up and had a stroll at the Marina Grande.  Then it was lemon risotto again and another sleepless night.