I know that the UK has been getting brilliant weather as well – but it doesn’t seem at all like October.

Yesterday we went up for breakfast for the first time and we were staggered at both the array of breakfast food and the amazing views from the room.

Up on the fourth floor the breakfast room was smartly laid with starched white linen cloths and the tables spilled out onto a terrace overlooking the water. Absolutely fantastic. 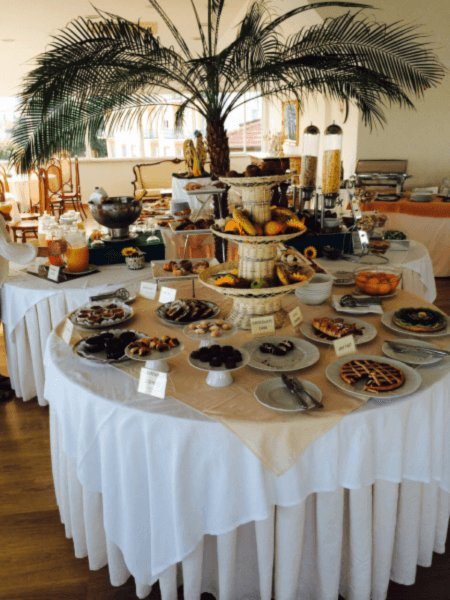 There was everything from quiche to chocolate cake on display and by far the best breakfast we have had this journey.

After the amazing breakfast, we took the lift down to the port-side and were surprised to be the only ones walking along rather a seedy and dirty path to the ferry.   Most people take the road it seems!

It also seemed quiet from a distance but when we got to the boat area the crowds were absolutely huge.  It was only 9am in October, so I hate to think what it would be like mid summer.  People were herded rather like animals on to the boats and we were very lucky to end up in a little corner of the outside deck where we had fantastic views.  It was slightly heat hazy as we left Sorrento and we had a great view of the villa near us. It was that same villa that featured on Monty Don’s Italian Garden programme.  It is literally steps from our hotel.

The half hour boat trip was worth the stress at the port and our first view of Capri’s cliffs is another lasting memory.

We stopped first for a cappuccino where a friendly waiter was more than happy to explain the different things we could do on the island.  I was really glad that we had a focus of interest in the gardens of Villa San Michel in Anacapri.  We took a rackety little orange local bus there and it was crammed to the gills again.  We were lucky to have a seat as the road is littered with hair-pin corners and more than a little scary and we had several close shaves. Each time there was an audible gasp from everyone on board.

Once again, I was a little disappointed to find Anacapri so commercialised and busy and by then it was extremely hot. I’ve completely forgotten it’s October.

The villa and gardens are a very short walk away but once we arrived into the house  we had to force our way past several large tour parties to get out into the gardens.

Then it was a a huge treat as the views through  the trees and  terraces are absolutely incredible.

It is strange how a fantastic view can be made even better by seeing through an arch or a window.

While taking a photo at one of these viewpoints I shouted “hold your stomach in ” to Mel.  The man nearest me thought it was meant for him and promptly sucked it in causing a nearby woman great hilarity.  Not sure if he was her husband or not but it was a priceless moment.

We ate lunch at the little terrace cafe and although it was only bruschetta it was memorable and delicious.

By this time I was beginning to feeling a bit hot and bothered, not to mention tired, so after a little wander we stood in a queue for the local bus down the hill.

However it was so busy we decided to take on of the open top taxis.  Nothing short of amazing for me to do that as there were no seat belts and the road was so winding.

However we reckoned that it would be so busy by then that we could not go fast so any danger should be limited!

This proved to be true but it was still a bit of a white knuckle ride. As with everything on the trip, the views were amazing. And I felt a bit proud of myself for not being my usual wimpy self!

We ate our daily allowance of gelato in the village above Capri before walking down a windy lane to the port again.

We both nodded off on the return boat – this exploring is exhausting work! 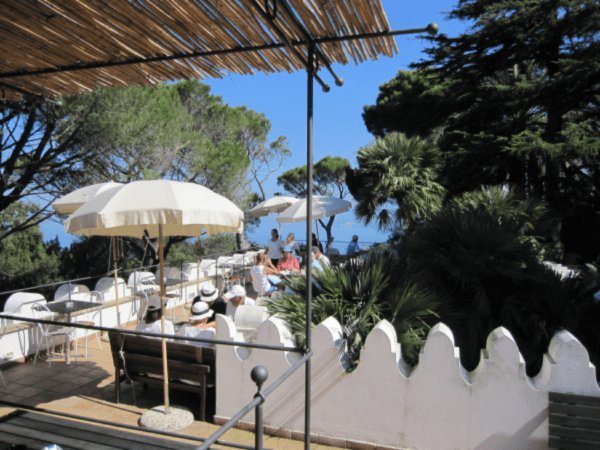 By this time we were desperate for a dip in the pool and I was amazed that Mel went straight for it.  He is not good with cold water and it is certainly a chilly pool.

A meal in the town ended our day and we had our first taste of Lemoncello since arriving in Sorrento.  It is a local speciality so the waitress laughed her socks off when Mel asked if they had any.

We went to Amalfi and Ravello today – more about that tomorrow.