The Venice Simplon Orient Express and the beauty of Art Deco 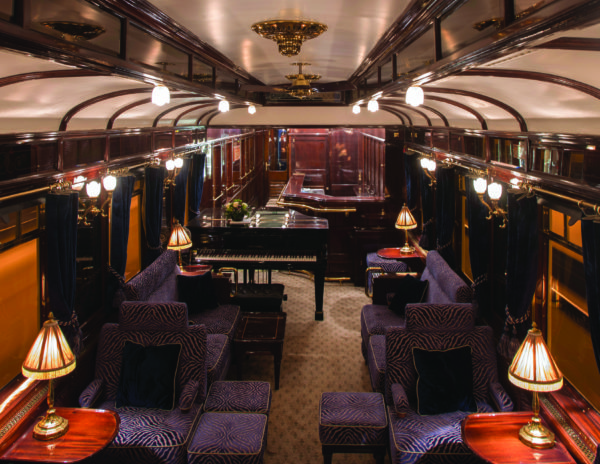 Awaiting at the platform sits The Venice Simplon Orient Express with shiny royal blue carriages and shimmering gold accents that glisten with enticement and intrigue. Full of the beauty of Art Deco and encapsulating the style, grace and glamour of an era of travel known as the Golden age, The Venice Simplon Orient Express is ready for you to step aboard for a journey like no other. A travel experience that will take you through history and on an adventure that will leave you with precious memories to treasure forever.

Travelling the world became an exciting opportunity during the 1920s and 30s. The period between the two World Wars allowed for development and those who had the time and resources and who were brave enough embarked on new adventures to faraway places. Travel became an immersive experience that went far beyond the means of getting from one place to another, it was about romance, exploration, discovery, comfort, luxury and most importantly fulfilling. This new period of travel became known as ‘The Golden Age’ and escaping on a journey on the Orient Express will take you back in time to this glorious part of history.

During the 1920s and 1930s the Art Deco style that had first appeared in French design before World War I became even more apparent. Striking geometric shapes from Cubist influences and vivid colours from Fauvism along with the style, grace and curves depicted in the Ballet Russes influenced the progression of Art Deco design further. This led the way for the movement to influence the designs of objects such as radios and homewares, to fashion, jewellery and even architecture.

Art Deco was prominent in design trends throughout the 1920s and 30s and attention to materials used is what made the style so luxurious and elegant. The importance of quality and longevity in the resources meant expensive and exclusive woods, crystal cut glass, gold, ebony and ivory were often used. Design was about grandeur, style, detail, luxury, comfort and immaculate finishes and it is this that The Venice Simplon Orient Express encapsulates perfectly. The combination of the Golden Age of travel and Art Deco details combine to create a luxurious rail experience that aesthetically sets the senses alive.

Each and every carriage that makes up this beautiful train has been lovingly restored with the finest craftsmanship and immaculate attention to details, from the crisp fresh linens, bespoke fabrics and velvets to the exquisite highly polished marquetry and antique details in the crystal lamps and tableware. Everywhere you look the essence of Art Deco design and its rich influences can be seen and enjoyed. Linear qualities, curves, floral shapes, reflective surfaces and glossy details immerse you in a design movement that oozes a chic aesthetic.

Taking a journey on this spectacular sparkling train means you journey in carriages that hold some of the most famous travel stories that are known all over the world. Known for its excitement, style and adventure, you too can experience this when stepping aboard the Venice Simplon Orient Express.