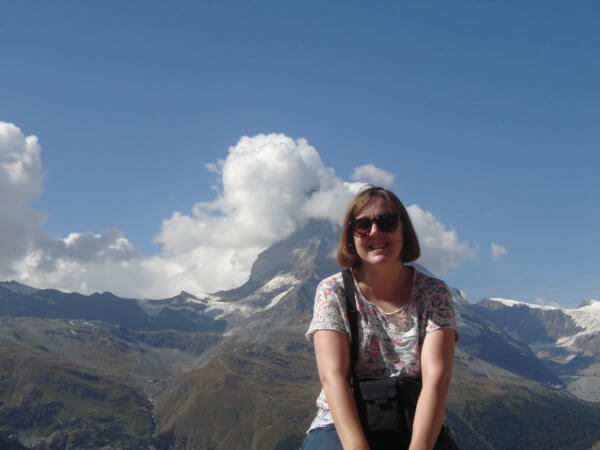 At Planet Rail, it’s not just our customers who believe we offer an award-winning combination of excellent service and wonderful holidays with carefully chosen itineraries, rail routes and hotels.

It’s not just our customers who choose a Planet Rail holiday but our staff do too!

When planning her recent holiday, our Product Manager, Sharon could not think of a better destination to offer efficient rail travel, superb scenery and a varied itinerary than Switzerland.

Read on for some of the rail-based highlights of her holiday, which includes journeys on the renowned Glacier Express and Bernina Express and on the cogwheel Gornergrat and Rigi mountain railways.

You might think that a rail holiday would be a busman’s holiday for someone who works for a tour operator specialising in holidays by rail.

When holidaying in Switzerland, travelling by rail really is the best way though.   From the moment we arrived in Switzerland and throughout our entire stay, the Swiss railway system proved to be as reliable as its reputation.  The trains were prompt, clean and comfortable and all our arrangements went to plan.

The diversity of the scenery is what makes the Bernina so special and it is easy to see why the line has been awarded UNESCO World Heritage status. 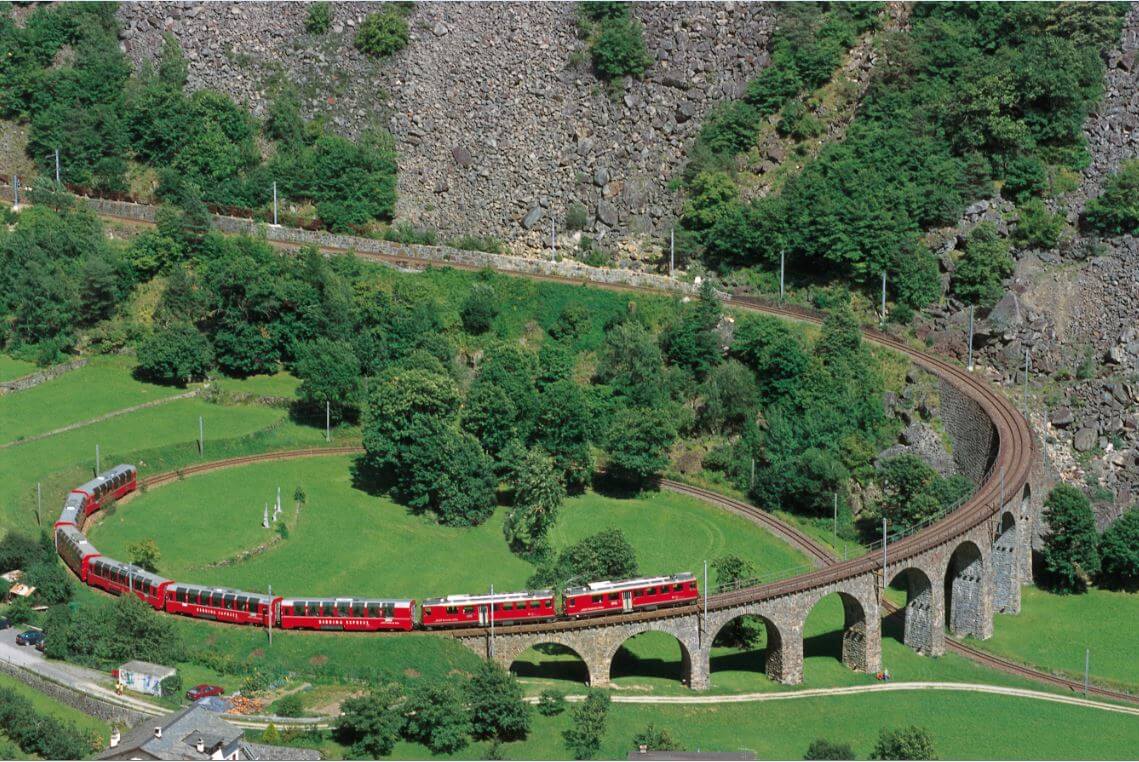 We travelled from our base in Davos in Eastern Switzerland just across the border into Italy and to the town of Tirano.

Our journey took us alongside steep wooded mountains, past glaciers and lakes, climbing up the barren Bernina Pass until we reached the highest point of the line at Ospizio Bernina, 2,253 metres above sea level.

We stopped briefly at Alp Grum, where the valley stretched out for miles below us and we could see as far as pretty Lake Poschiavo.

From Alp Grum, the train made its winding descent and as we got closer to Italy, we saw unexpected apple orchards, reminding us of the contrasts Switzerland offers in terms of climate, scenery, language and culture.

With no border control or obvious landmarks, we found ourselves in Italy and our journey came to an end as we travelled through the streets of Tirano – literally! – to the station.    We had time for a wander through the old town and a bite to eat.    As some travellers boarded trains from Tirano to from Lake Como, Milan and beyond, we rejoined the Bernina Express again for our journey back to Davos. 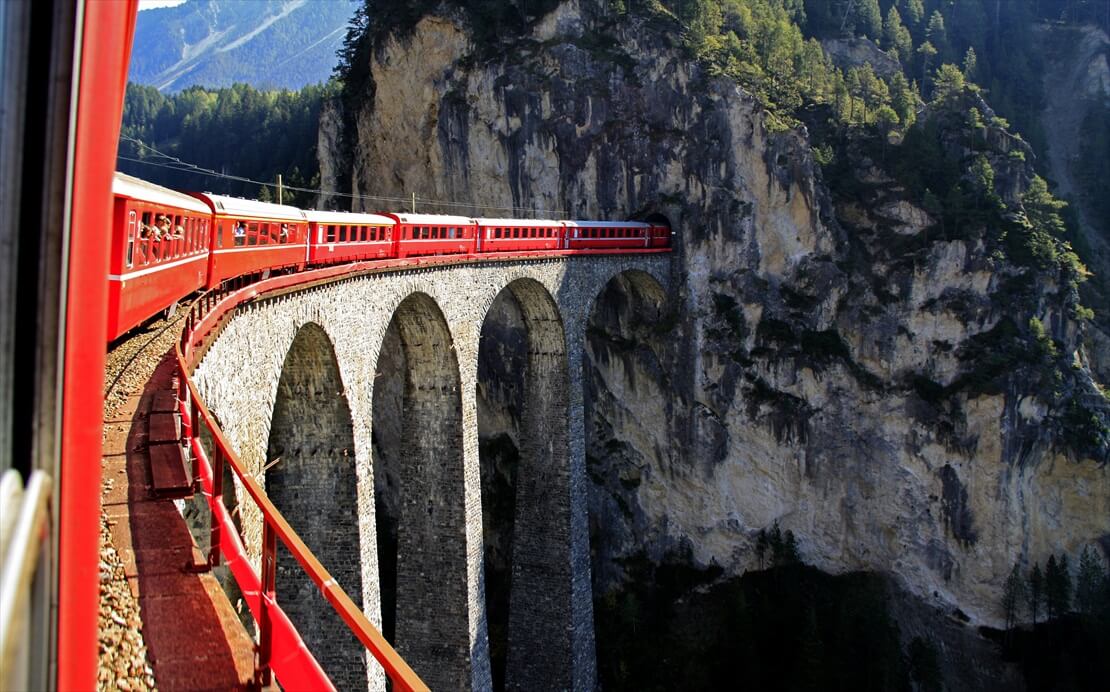 Called the “Slowest Express Train in the World”, we enjoyed our leisurely journey on almost the entire length of the Glacier Express route, from Filisur to Zermatt.

The views from the panoramic carriages were exceptional and provided photo opportunities galore.    Our meandering journey took us through alpine meadows, alongside mountains streams and past picturesque villages with flower-bedecked window boxes on their traditional wooden houses.

What a treat to sit back and watch the world go slowly by whilst enjoying a 3 course lunch, with a glass of Swiss wine!   Fortunately we weren’t eating when we crossed the much photographed Landwasser Viaduct, a great feat of engineering on the UNESCO World Heritage section of the line.

As we left the viaduct, everyone rushed to the windows with their cameras to try and capture the back of the train while it was still crossing this famous landmark!   One of the high points for me personally was the climb up to the Oberalp Pass at over 2,000 metres as I had done this journey by car on my first ever trip to Switzerland over 20 years ago!

Being at the summit is almost like being in another world – its bare landscape a contrast to the lush green valleys we had not long passed.  As we prepared to make our descent, Andermatt seemed like a model village below us and with each turn, it got closer and larger as we snaked our way down.

Landwasser and Oberalp aside, the whole journey is a joy and our final reward came with a glimpse of the instantly recognisable Matterhorn, standing in the early evening sun, as we approached Zermatt.

The Gornergrat promises the highest open-air rack railway in Europe and the steady climb from Zermatt through pine forests to the summit at over 3,000 metres did not disappointment.  We were greeted at the top with a glorious sunshine, snow covered peaks in abundance and a splendid view of the majestic Matterhorn.   The panoramic views were stunning, not surprising given that 29 peaks of 4,000 metres or more are visible from the summit. 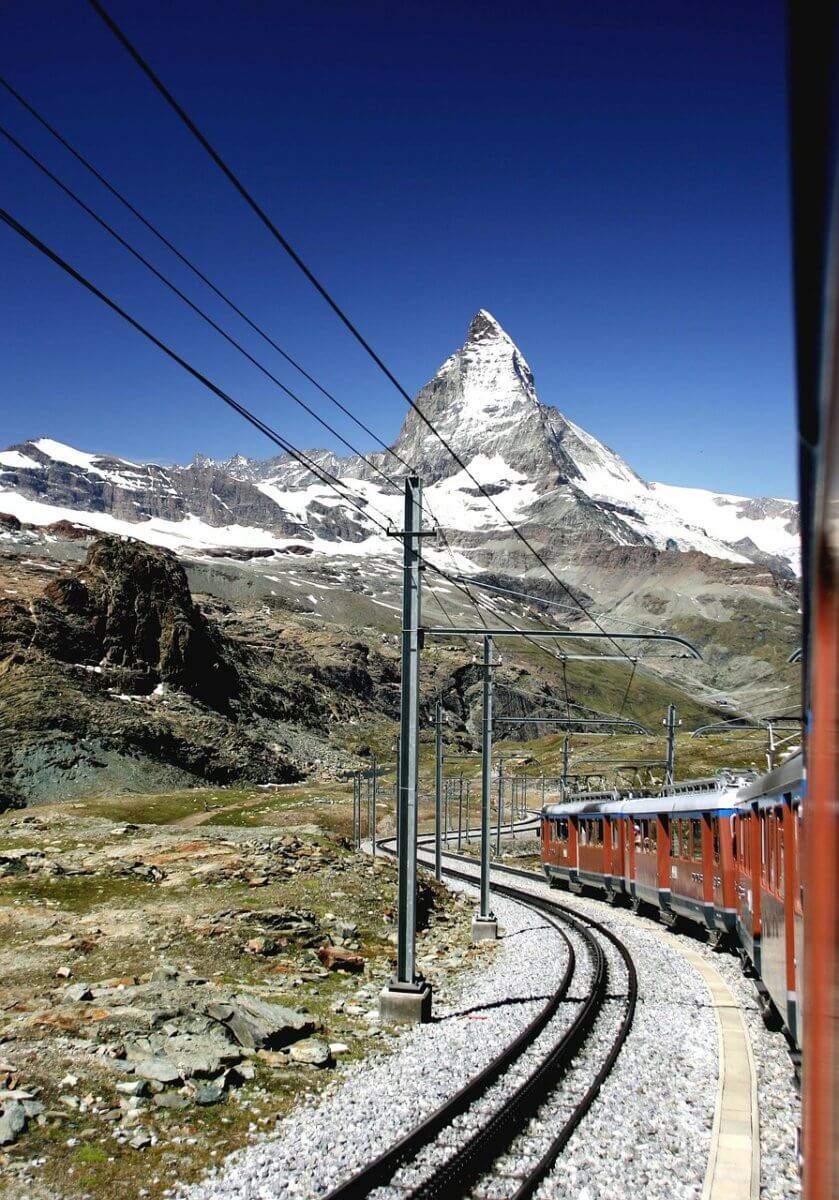 Surrounded by these alpine giants we felt tiny, especially looking at the huge glaciers which had formed over the course of time.  The light was extraordinary and the view seemed to constantly change according to the shadows cast by the sun over the various peaks.  After time at the summit, we set off walking and then jumped on the train further down the mountain for the journey back down to Zermatt where a coffee and large slice of cake was waiting! 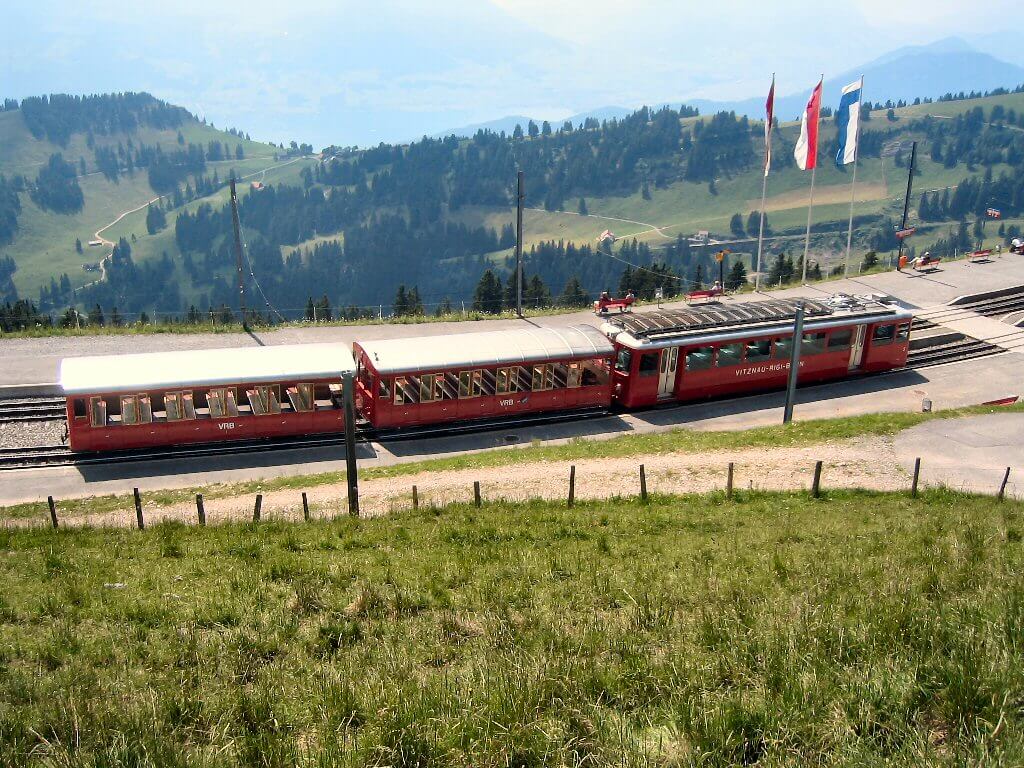 What we loved about this excursion was the combination of cogwheel mountain railway, boat and cable car.   We set off from Weggis, on the shores of Lake Lucerne, by boat – and ours was a paddle steamer – to Vitznau.    Here we joined the Rigi railway for the journey to the summit through the typically Swiss green meadows.   It was a hot and sunny day so we were very happy to be sitting in open carriages.   It was such a lovely journey as with each turn more of the lake opened out below us and Lake Lucerne is such a picturesque lake.    Although Rigi wasn’t the highest mountain on our trip, the view at the top, Rigi Kulm, was magnificent and we could see for miles.   We had views over not just one, but two lakes – Lake Lucerne and Lake Zug – and an impressive number of peaks including the Monch, Eiger and Jungfrau and even mountains in Germany and Alsace in France!  We took the train part way down the mountain, to Rigi Kaltbad, where we joined a cable car for the final leg of the journey back down to Weggis.

Switzerland by rail in summary…

Switzerland is the ideal destination for first time visitor as the rail network is so easy to navigate.  It is equally as desirable for those who have been there before because there are more railways to discover, more lakes to visit and more mountain peaks to climb, albeit by train in our case.  Although we did and saw such a lot during our 10 day holiday and packed in much more than just these four railways, there is certainly much scope for another holiday to Switzerland and if it’s a destination we choose to revisit, there would be only one way to travel – by rail of course!