Rail Holiday: A Magical Journey across the Netherlands & Belgium by First Class Rail

Discover three of Europe’s most iconic cities in a seven day break with Planet Rail, transporting you to Bruges, Amsterdam and Brussels in the comfort of First Class train travel.

The journey begins in London, where you board the Eurostar and settle down in Standard Premier Class.

The high speed service whisks you to Belgium in little more than two hours, and upon arrival, you’ll change trains and continue to Bruges, where it is just a short distance to your delightful hotel in the heart of the city.

Though your time in Bruges is short and sweet, this magical city is sure to make an impact. Bruges was made for romantic getaways, its brilliantly preserved Medieval architecture, clock towers and cobbled streets providing the ultimate backdrop for a weekend of culture and indulgence.

Affectionately nicknamed the ‘Venice of the North’,Bruges boasts a network of pretty canals and stone bridges, though it is more quaint and charming than its Italian counterpart, and ever deserving of its UNESCO World Heritage Site status.

The city is a prime example of a medieval settlement, having maintained its historic fabric tremendously well over the centuries. Imposing Gothic architecture dominates the centre (historical architecture buffs may also notice subtle hints of Romanesque design), the epitome of which comes in the form of the Heilig-Bloedbasiliek, the Basilica of the Holy Blood. This 12th-century basilica is one of the smallest buildings in Burg square, but its intricate decoration and interesting history makes it the most attention-grabbing. The neighbouring Markt square boasts its own architectural feats; the opulent Provinciaal Hof and iconic belfry stand tall, while crowds gather and horse-drawn carriages depart the plaza beneath.

Bruges is one of Europe’s cultural capitals, showcasing an impressive collection of artistic masterpieces and architectural triumphs, not to mention its theatres, concert halls and museums… and a delicious Flemish cuisine that features waffles, chocolate, fries and beer! Be sure to treat yourself to some of these specialities during your day in Bruges – you’re on holiday, after all. Though fleeting, your time in Bruges is sure to inspire and delight, as well as serving as the perfect introduction to its Dutch sister and your next stop, Amsterdam. 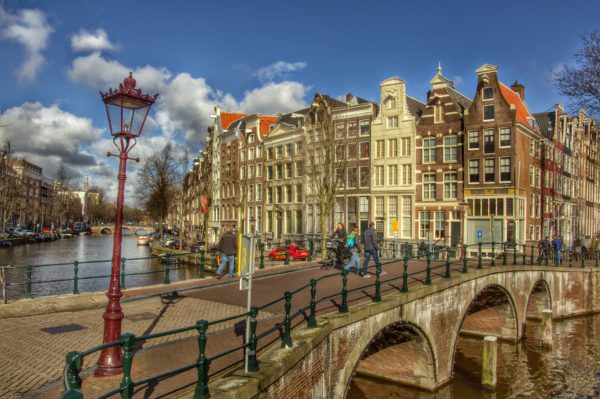 The following day, you’ll be transported to Amsterdam via Inter City train. Three nights in the Netherland’s bright capital will allow plenty of time to soak up the sights and sounds! Few cities blend historical influences with cool urban flair like Amsterdam. This cultural hub possesses a huge collection classical masterpieces, featuring the likes of Van Gogh, Rembrandt, Mondrian and Matisse. Its architectural history is also tremendously rich; 17th, 18th and 19th-century design coincide to create an eclectic mix of Dutch Baroque, Classicism and Art Deco, with some of the city’s most notable sites including the Oude Kerk, Royal Palace and the Tuschinski theatre.

Amsterdam contains the world’s highest concentration of museums, making it the perfect destination for culture vultures. Choose from 60 of these heritage centres, including the Rijksmueum, the Van Gogh museum, and of course Anne Frank’s house. The Jewish Historical Museum and Dutch Resistance Museum are also must-sees, making for a powerful, poignant experience that should, so rightly, never be forgotten.

Amsterdam is a place that sounds like no other. Step outside and you’ll immediately notice its unusual instrumentals: a combination of excited chit-chat and the percussion of church bells striking, tram bells ringing and bike bells chirping.

When it’s time to gather your thoughts and enjoy the fresh air, it’s the perfect soundtrack for an aimless stroll around. This compact city offers a tightly knit web of cobbled streets, pleins and canals, with secret gardens, quirky bars and boutique shops at every twist and turn. Pop your map away and allow yourself to get lost – don’t worry, you’ll never stray too far from a canal! Exploring these less-travelled areas of the city will also present you with a choice of hidden gems for lunch or a drink, and by avoiding the busier tourist areas, you’ll enjoy much more reasonable prices.

After three nights in Amsterdam, it’s time to board your train to Brussels. 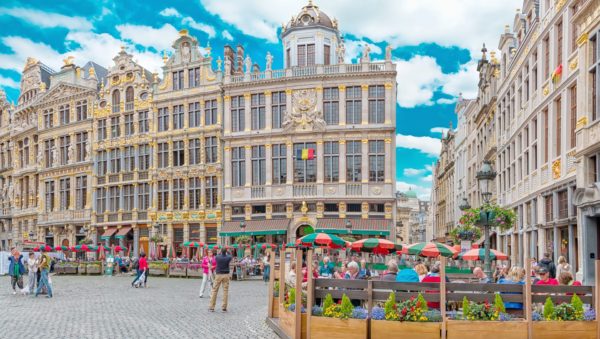 From  Brussels Midi station you’ll then head to your final hotel, which sits only 300 yards from the Grand Place. Belgium’s fascinating capital is the perfect finale to your trip, offering you a choice of interesting cultural activities, retail therapy, and opportunities for indulgence. The city is fast becoming one of Europe’s must-see destinations, thanks to its small town quirks being coupled with a strong cultural heritage and economic success.

Step across to the Grand Place, another UNESCO World Heritage Site to add to your trip’s list, and enjoy the grandeur of this large, cobbled, medieval market square. In the warmer months you can visit the daily flower market and admire the blooms, then stop by a cafe for a great cup of coffee. When it’s closer to Christmas time, there’s a seasonal market and ice rink instead. The Grand Place is particularly impressive in the evening, its structures illuminated against the darkened sky.

The Grand Place offers the ideal base for exploring Brussels, and within a few metres of the square, you’ll discover museums, galleries, and the splendid Gothic town hall. A little further afield, you’ll find great shops and trendy bars, perfect for picking up any last minute purchases before you head home. It’s also worth checking if there are any exhibitions or festivals running during your visit – Brussels sure knows how to celebrate!

Following your day in Brussels, it’s time to head home. From the Midi station you’ll rejoin the Eurostar, transporting you back to London with ease and comfort. Find out more about this Planet Rail holiday by visiting our page about Amsterdam, Bruges & Brussels by First Class Rail, or alternatively contact one of our friendly experts on 01347 825292. We look forward to welcoming you on board.