A brief history of the Taj Mahal 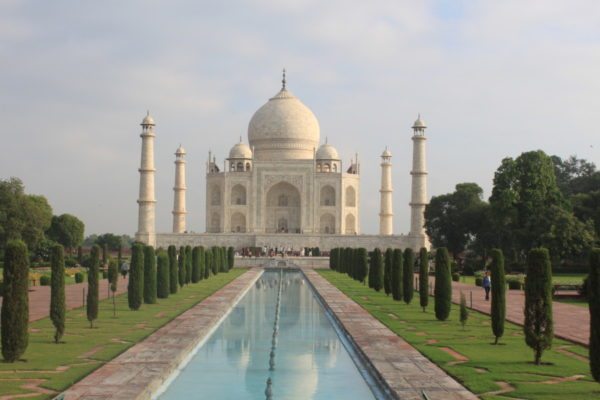 Located on the banks of the river Yamuna in the Indian city of Agra, the Taj Mahal was built to encapsulate the love a man had for his wife.

Inspired by love, loss and sorrow after she died giving birth to their 14th child, the Taj Mahal is a Mausoleum that reflects love in every way.

Shah Jahan, popularly known as Prince Khurram before his accession to the throne, commissioned the build of the Taj Mahal, and construction began in 1631 after the loss of his wife Mumtaz Mahal became unbearable.

It was to encase the body of his beloved and create a monument that honoured all that he loved about her. Shah Jahan enlisted the architect Ustad Ahmad Lahauri to help him create his vision.

Taking 22 years to build and at a cost of 32 crore rupees, it was to become an amazing feat of Persian Islamic and Indian architectural styling, that is now one of the 7 wonders of the world. It is easy to see how the inspiration of his wife is reflected in the opulent design of the Taj Mahal –  after all her real name was Arjumand Banu Begum and she was named Mumtaz Mahal meaning the ‘’chosen one of the Palace’’ or ‘’Jewel of the Palace’’.

Within the ideas and design it was vital that Jahan could see the Mausoleum from his Palace and that views were never obscured. A grand and pristine design in white marble from many different countries and regions including China, Tibet, Sri Lanka and Arabia was only the starting point in this elaborate gesture of love.

20,000 workers including masons, stonecutters, carvers, calligraphers, painters and many more artisans and labourers were involved in the creation along with 1,000 elephants that were used as transport to move the materials about.

The exterior is a spectacular design of concave and convex elements that create elaborate contrasts and enhance the details of the Taj Mahal. The design is perfectly symmetrical and is identical on both sides in architectural construction. The surface is adorned with 28 different varieties of precious and semi-precious stones some of which were ripped away during the Indian rebellion in 1857. Along with the sparkling jewels and gems there are many more exquisite and ornate details to the exterior.

Calligraphy poems, verses and extracts from the Quran are escribed in the marble, painted murals, intricately cut marble, geometric patterns and mosaics all add to the beauty of this overwhelming piece of history.

It is said that the colours of the Taj Mahal in different lights actually reflect the many female moods of Mumtaz Mahal.

In the morning light the building is bathed in a pinkish hue and by day and early evening a milky white colour, clean and pristine. By late evening and by the night of the moon lit sky, the Taj Mahal emits a radiant golden glow.

Inside the Taj Mahal the details are as beautiful, ornate and elaborate as the exterior. Shah Jahan’s body was entombed beside his wife’s after his death and the sarcophagi seen within the tomb are representations but not the actual final resting places of the couple.

The actual bodies are housed below the tomb in a relatively simple crypt this reflecting the Muslim tradition of not elaborately decorating the graves.

The gardens surrounding the Mausoleum also reflect the thoughts and meanings Shah Jahan wanted to encapsulate. Symmetrical marble pools provide pretty reflections, Cyprus and fruit baring trees symbolise life and death and the carefully considered composition offer an uninterrupted view of the Taj Mahal from wherever you stand. The surrounding buildings of Mosque, guest house and entrance gateway were all designed to enhance and uphold the beauty of the Taj Mahal even further.

What an amazing way to show someone just how much you loved them and let their beauty, character and love continue to inspire.

To find out more about rail trips to India including opportunities to visit the Taj Mahal, browse our Indian Holidays here, or contact a member of the Planet Rail team on 01347 825292